Although it is repeatedly mentioned as such, polyamory is not an alternative sexuality, but an alternative model of romantic relationships. People are described as polyamorous, or (abbreviated) poly.

The word is a combination of poly which means “more than one, many” in Ancient Greek and amor which is Latin for “love”. It describes people who (want to) live in a romantic relationship with more than one person at the same time while every partner knows of all other partners and every relationship is consensual for all connected individuals.

From the outset, a polyamorous lifestyle requires more time, energy and emotional labour than a closed romantic relationship between two individuals, simply because more than two people have to agree on things on a daily basis. In addition, in multiple relationships, questions and problems arise that cannot happen between two individuals, like, “Who sleeps in the middle?” or “Could you mediate between us?”.

Since our existing language does not include representations of polyamory, new terms are needed to describe these relationships. The idea of the heteronormative mainstream, the majority culture, is that a romantic relationship consists of two people. This is reflected in the language: A romantic couple always means two people, but a couple of friends can be any number of people.

As soon as more than two people are connected over the romantic level, complexity increases by a certain factor, with every additional individual. The comparison to a molecule is therefore appropriate even beyond wordplay: In chemistry, over time, everything falls back to the next stable level that needs the least amount of energy. Networks of people tend to do the same, and as a result, the most common long-term stable polycules consist of the minimum amount of people, that is, three individuals. A polycule of three individuals may occur in two different forms which are named after their visible structure.

In the figures below, the letters stand for the individuals involved, and the lines with heart show a romantic relationship. 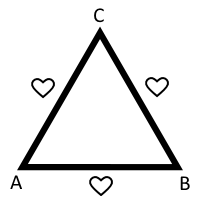 A triad or poly triad is a triangle formed out of the romantic relationships A+B, B+C, and A+C.
A further term is throuple, a portmanteau of three and couple, because, well, there are three couples. 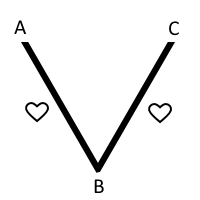 A V includes two romantic relationships A+B, and B+C, but not A+C. The term metamour was invented for the relationship between person A and person C, from meta which is Latin for “over something” and amour which is French for “a lover”. So metamours share a meta-love, over person B who connects them. The actual intimacy between metamours is not defined, except for the absence of a romantic relationship, and differs in individual cases: Some are best friends, while others barely know each other.

A polycule of four people is called a square, where not all the connections of the square must be romantic relationships, but may also contain metamours. Its most common variant is the N, which contains three relationships in a row, and three metamours: 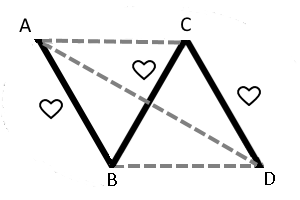 For other constellations, I am not aware of any special terms other than polycule. However, since many people who are interested in polyamory have an academic background, they have established the convention to describe polycules in scientific notation with an angular letter in the Latin or Greek alphabet.

I, the author of this blog, am biromantic and I live a polyamorous lifestyle: I have a girlfriend and a boyfriend who are a couple as well. Together we form a romantically closed triad (= We are three people, and we all do not pursue any further romantic interests).

Apart from these definitions, there is not “the one way” of living polyamory, which does not mean that all polyamorous lifestyles work, that is, produce loving, stable, long-term romantic relationships. Some strategies never even produce more than parallel short-term relationships.

Polyamory is a consensual relationship between more than two people based on emotional love and intimate acts over a longer period of time.

How does healthy polyamory work? – part 1/3: Is it worth a try for me?

The desire for polyamory always develops on top of some concrete motivation, irrelevant whether the person concerned is single or part of a couple. The reason for this motivation is, at least initially, often unconscious. A desire for polyamory might also be misdirected by false ideas which have nothing to do with a healthy reality. After uncovering and examining these ideas, a completely different wish than for a poly relationship might show up under it.

Neither option would be the fault of the people involved, as we are living in a society which does declare various wishes concerning sex and love – which are outside the monogamous heteronormative mainstream – for nonexistent.

To say it with Farin Urlaub, singer of the German band “Die Ärzte” (= “the doctors”):

“It is not your fault that the world is as it is.

It would only be your fault if it remained that way.”

Therefore it is the responsibility of every person, who has a wish for a polyamorous relationship, to find out about the authentic background behind this motivation – especially whether it stems from a primary or a secondary motivation.

In order to be able to assess this risk the first and most important step is to reflect on that wish: What would I want a further romantic relationship for?

For most inquirers the answer will be:

“Because I have fallen in love with another person while already living in a romantic relationship.”

The cascade of questions, however, continues: What have I fallen in love with this person for?

Now it is getting tricky. Since secondary motivations – which are not recognizable at first impression – are often behind falling in love or a “crush”.

For a majority of individuals in the poly community a deficiency in their earlier relationships or in their present partnership plays an essential part why they are into polyamory now. It goes like this:

“If my existing partnership does not deliver on something I need, I will try to get it from another person.”

If the foundation (= the original couple) is not stable due to some deficiency, all additional relationships connected to these persons will also be unstable in extension. More about this mechanism follows further down in this instruction, when “energetic” balances between partners in romantic relationships are discussed.

How does healthy polyamory work? – part 3/3: Know where the limits are

In my articles about the poly community, I have described ideas and beliefs which do not contribute to or even prevent healthy polyamory (that is, loving, stable romantic relationships on a long-term basis).

As a polyamorous triad, we have researched in self-experiment, how we, and a polycule in general, can have healthy relationships for all individuals involved.

Since we did not have a healthy role model for this emotionally new territory, neither other people we knew nor in the media, we had to discover and understand everything by ourselves. During this learning process, we unmasked most ideas of the poly community as dysfunctional beliefs, termed them the poly ideology, and gradually removed them from our everyday life.

Subsequently, we came up with the following list where we show the – in our opinion – most important principles of healthy polyamory. Interestingly enough these are the same as for any healthy couple.

If being romantically open or closed is handled like this, the individuals involved can thereby effectively avoid typical toxic dynamics of the poly ideology.